It has been a MASSIVE week and I don’t know how I’m going to fit everything in this post but I am going to try.

Let’s start easy with the cricket or more specifically T20 Finals Day at Edgbaston cricket ground. This is a day where four county teams battle it out to be crowned champions and it is arguably the best day of the cricketing calendar.

My team didn’t make it as far as the semi-finals (or in fact the quarters) as you can read here but I knew the day would be buzzing regardless and also for me it felt like a great send off the day before I move into university.

The teams there were: Worcestershire Rapids, Lancashire Lightning, Sussex Sharks and Somerset. If you read my last post you might remember me saying that I was going to be an honorary Lancastrian for the day; that didn’t work out because they sort of lost their semi-final against Worcestershire. Somerset then lost to Sussex which angered the supporter sat next to me who despite spending eight-odd-quid on a ticket for the day left without seeing the final. The Rapids were crowned champions.

On the journey home however it hit me like a brick that I would be leaving home the next day and I didn’t know how I would cope with that.

Sunday morning came and everything felt…odd. Like not overly final because I was not officially moving out but still final enough for me to fill a car of my belongings. First impressions were good though when a friendly second year helped me move in and get my key.

My room is actually really nice and I definitely got one of the best views I’ve realised since visiting other people’s flats. The main problem I have found is that it takes about 2000 years to boil some pasta because the stove is so poor – thankfully it’s being replaced some point next week. The kitchen is pretty big for five of us which meant we could host a decent flat party plus my flatmates are all super lovely and chilled out so I think I’ve done well on that front. 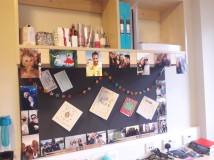 So far I have felt that any talks I have attended have been totally pointless including a session about how to log into computers etcetera… I am a computer science student, if I don’t know how to do that I am on the wrong course.

Freshers’ Fair was also pretty pointless for someone who doesn’t follow any religion or play sports. That was generally what they were catering for. But I have joined the LGBT+ society which is pretty cool. Somewhere I can be myself I suppose.

I think one thing I have found difficult as someone who is very introverted is all the almost forced socialising. Everyone wants to get to know people which is why Freshers’ Week is full of club nights and wristband deals to get everyone out together. I don’t like going out out (if that makes sense?). I have enjoyed the pre-drinking and meeting new people but I’d rather do it in the accommodation than go out to a loud club. I have met some ace new people though and I think it is going to be alright this uni thing…maybe.

Okay so this week hasn’t gone by without a meltdown or two because yes it is all very scary. I am fundamentally on my own and although I have someone looking out for me here we’ve known each other less than a week and they don’t know everything about me. It is going to take time to settle.

Today I definitely wanted a bit of normality so went to the studio to drum for three hours which was good for me. I relaxed and although I had to go on the hunt for a new kick pedal because the one in the studio was broken it was still chill. It has been a while since I have played a proper kit…April I think was the last time…so I revisited some past tunes as well as learning People Know (How To Love One And Other) by Kaiser Chiefs. Lot of fun!

What else have I done this week…? Saw Kevin Bridges at the Birmingham Hippodrome yesterday who was fucking hilarious. A brilliant show and pretty decent support of Paul McCaffrey. I just enjoyed seeing my parents and sister again to be honest. That was after my job interview at the NEC for Ticket Factory! It is an ideal job for me because it is casual so I will be able to pick my shifts to fit in with my lectures. I hope I get it, it would be good to be earning some extra cash whilst at uni.

That is about it really. All very much condensed down. Next week is when the hard work begins which could be interesting considering it has been over a year since I have been in any sort of learning setting. And I am definitely coming down with Freshers’ Flu so it might be a weekend in bed with hot drinks for me. Oh well. Peace.

Picks of the week: