Last Friday Jordan Cardy released his debut album SCUM and I think it is absolutely fantastic!

I bought the deluxe album the day of release when I was paid and I spent my Saturday thoroughly enjoying the unfamiliar but brilliant sound of Rat Boy. I buy a lot of debut records from “new” artists because I love the sort of rawness that they bring. It is never overly produced and in a way you can hear the inexperience but that is what makes it real. Rat Boy however does not sound inexperienced.

He is a very talented songwriter and obviously has been for quite some time despite being dyslexic but you can’t do everything by yourself. I get the impression that his touring band Harry Todd (guitar, sampler, keys), Liam Haygarth (bass, backing vocals) and Noah Booth (drummer) have become more of a major part in the music production of Rat Boy especially during the creation of SCUM.

SCUM is one of those albums – well Rat Boy is one of those artists I suppose – that is difficult to categorise. The reliable source that is iTunes describe it as “alternative” but that doesn’t really say anything. Some tracks have a Hip Hop vibe and others are more Indie I suppose which is probably why I love. Like really love it. 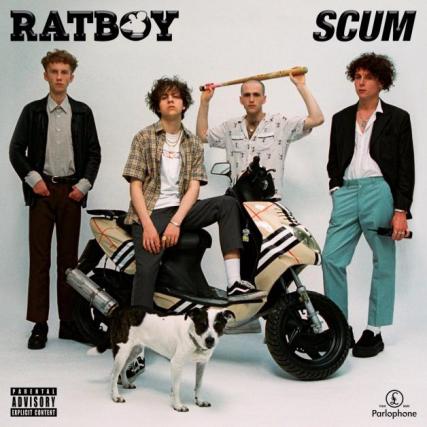 My first impression of the album was how much I love the voice of Rat Boy, you wouldn’t call him a “great singer” but I love his tone and the mix of singing and rap. Both of which he is very good at. I can hear the influence of The Clash on the record and I do understand his likeness to Jamie T but in my opinion he is much more talented. In fact, this has been recognised with a flurry of New Artist/Act awards last year from the BBC, NME and MTV!

Jordan has had some notable experience help him on the album such as Damon Albarn, Stephen Street and Nick Hodgson. Albarn (Blur, Gorillaz) assisted in the writing on both Track 2 and Track 12, Turn Round M8 and Get Over It. Street who’s producing experience is second to none having worked with Blur, The Smiths and Kaiser Chiefs assisted on Track 25, Kicked Outta School. And Hodgson (Kaiser Chiefs, Prediction Music) – who is the reason as to why I heard about Rat Boy a few months ago in the first place – co-wrote and produced Track 5, Laidback, which was published through his record label; Prediction Music.

My favourite tracks (right now) off the album are Revolution, Laidback, Move, Scum and Ill Be Waiting. All of which have a very different feel which makes the entire record seem very textured. I think there is something for everyone!

My main and actually only criticism however is the interludes between the majority of the tracks. When I listened to the album through the first time I found the interludes as a witty additional but in my opinion since then I’ve found them unnecessary and at times annoying. Which is why I’ve created a playlist on my iPod with just the songs and without them.

But it is only a small con of purchasing the deluxe album because overall I think it is fantastic and I look forward to hopefully seeing him and his touring band live soon. After washing clips on YouTube I think it would be an awesome night and a rocking atmosphere.