Well I’m back with another drum post. But this time it isn’t one that is me moaning about my back and how I can’t do it. It is a more positive outlook on it all.

I’m not drumming. Haven’t sat at my kit for about two months now and that is hard because of how passionate I am about it but I’ve stopped sulking (well sort of) and instead I am focusing on the future.

I do want to drum again, properly, and I want to improve. I want to become the best drummer I can and maybe one day be in a band because I think that would be wicked. It’s just a dream at the moment but you never know, it could happen. In this blog post I am going to be talking about my new practice pad, some exercises I have been doing and my dream kit.

Now I’ve got to admit, my back does seem to be improving and that is because of many contributing factors. Firstly, I am not forcing myself. Before despite the pain I was still trying to drum which was the wrong thing to do. It just made me unhappy and the entire situation worse. Instead I have been doing some exercises to improve the situation gradually and I think my half an hour walk to work (and back) most days have been doing me the world of good. I also spend most of my working day on my feet which has been improving my posture overall.

The exercises are nothing fancy. Mainly just the obvious stretches to the places which I feel need the most work. But I am trying to do these everyday – if I remember – usually before bed.

Now I come on to the exciting bit! I got a practice pad! Yay!

The other day I tried a wrist exercise on the back of my desk chair, an exercise that I used to find easy but in the absence of practice I now cannot do. This was a big wake up call for me because it suddenly dawned that when I do become fit again to actual drum I will be back to square one. Especially if I don’t keep up my wrist movements.

The back of my desk chair wasn’t cutting the mustard so I decided to invest in a Vic Firth 12″ Practice Pad. It cost me about forty pounds which is a lot for someone working part time on an eighteen year old minimum wage with other stuff to pay for but I just went for it and I’m glad.

I was actually told by my old drum teacher (big up Mr Jones) to get one about five years ago now…but oh well. Got there in the end Sir! But I finally have it and I love it, which may sound odd but I am a bit of a drum nerd so getting my Amazon parcel was like Christmas for me.

It just makes everything seem a bit less bad.

I follow a lot of different drum/cymbal companies over on Instagram so I get a lot of beautiful drum equipment on my feed on a day to day basis but nothing I have seen has been as beautiful as a setup that DW Drums posted six months ago. I have actually got this post bookmarked because that’s my goal.It’s Maple/Mahogany and I just think they look stunning! And…lots of toms! I love toms! In fact, when I get a proper kit it is going to be overloaded with toms. I’m talking at least four (two of them floor), increasing to an insane amount. I have an image of my kit resembling Nicko McBrain’s from Iron Maiden. Could be a tad pricey… 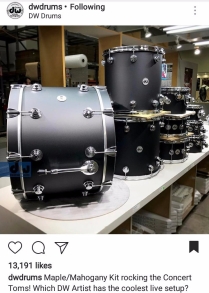 From what I’ve heard DW are very reliable when it comes to hardware so any pedals, stands and stools etcetera will probably also be from there. But also Pearl as well I know get great feedback from various drummers I know.

Cymbal wise. I’ve played with both Sabian and Zildjian cymbals but I probably prefer Sabian. I find the wash slightly better for my ears but that might just be because of the type/size/age of the ones I’ve used. But I’ve also mainly played with Sabian cymbals. The kit I learnt on had a hi-hat, two crashes (one of which was dented) and a ride. This particular ride cymbal had such a beautiful sound in my opinion, I am annoyed that I don’t remember the series it belongs to but I have a feeling it may have been an AA. I might have to enquire.

But I would definitely want to have at least two crashes (and of course a hi-hat and ride) maybe possibly three. Ooh and a splash cymbal! (They have holes in if you don’t know). I think the series of Sabian cymbals I like the look of are the HHX because of the darker tones but it is one of those things that you actually have to try before you buy.

I wouldn’t want my kit to sound bright, I prefer slightly duller tones but I also think it is important to have some versatility so a great snare is necessary. I understand that the drum heads add to that but I know very little about any of that to be honest. All I know is I prefer when they are rougher rather than being shiny but I don’t know what that means. I am not that knowledgeable about it.

So yeah, I would love to get to a point where I have my dream kit with the new shiny cymbals and my trusty Vic Firth 85As but it is going to take a while. I do think I can get there thought. One day! I just hope that day is sooner rather than later.