Live At Leeds. Wow. What an event. Big up the organisers because it was a hell of a day and – to be my knowledge – it all ran smoothly. Okay, yes, the gorgeous weather probably helped a bit. Not sure walking around Leeds would have been as fun in the pouring rain.

In my last blog I previewed last weekend (this event and PDSA PetLife) and highlighted acts I was planning on seeing…well that didn’t go to plan for several reasons but I still enjoyed what I saw. The atmosphere inside and outside the venues was ace so I was very happy. There was definitely a buzz in the air.

When I was travelling on Sunday I was thinking about how it would be best to structure this post because giving a blow by blow account of the day would be dull. Instead, I am going to highlight the best parts.

My favourite act of the whole day was actually the first act I saw. At Midday – after collecting our wristbands – we were let into The Wardrobe where we were blown away by British punk-rock band, IDLES. The band which was formed in Bristol back in 2012 created such a high and that’s without people being tanked up on booze. My favourite song I heard (people chanting the lyrics probably helped) was Mother. I think it was on the playlist being played at other venues throughout the day too.

They are a band who has been on my list of bands to see for over a year and they did not disappoint. I’m looking forward to seeing them again and in the meantime I have their tunes to listen to and the memories.

One thing I discovered in Leeds was the coolest venue I’ve ever come across. Church. It was literally an old church. The stage was set high up in front of a stunning stain glass window and the circular lighting rig acted as a halo for the acts on stage. Angelic is one word to describe the voice of the singer from Stereo Honey. A very high pitched voice but I enjoyed their sound from the balcony. It was a great half an hour of chilling with a drink from the balcony where only acts, press and VIPs were allowed. It gave me time to sit and relax. Reflect on the events of the day so far.

I was there for Nick J.D. Hodgson however and I thoroughly enjoyed his set (the shortest I’ve seen him play) and I was thrilled that some of my favourite tracks off Tell Your Friends were played: Feel Better, Honest Face and I Love The Way Your Mind Works. It was good to see the man himself afterwards too.

Discovery At The Key Club

The day and sunshine wiped me out but I still made it to The Key Club to catch The XCERTS. I didn’t know what to expect because I knew nothing about the band but I really enjoyed them. Need to give them a proper listen and see them again when I am not so tired. 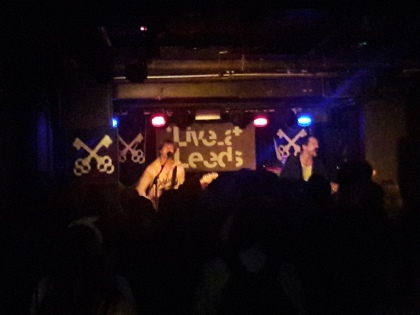 Being at a popular festival in Leeds I thought it would be possible to bump into a member or two from my favourite band, Kaiser Chiefs. In fact, I bumped into three out of five of the current line-up; Vijay (drummer), Simon (bassist) and Peanut (keyboard player).

Okay so there wasn’t much of an encounter with Peanut apart from him taking photographs of his ex-bandmate next to me in the crowd but I did have a good chat with VJ and Simon after IDLES and a longer one with VJ later. Let’s just say he was an absolute dude.

So would I do Live At Leeds again? Definitely! 100%. It was a great day and next year I look forward to discovering more new acts.