I didn’t upload my weekly round-up last week because of a busy schedule so here is a special double whammy.

Mainly the past two weeks have been full of a lot of work and assessments but there have been a few highlights and lots of music!

It started off with the brilliant Oxjam Brum music festival in Digbeth which I had the honor of reporting on. It was a great occasion for a fantastic cause. You can read all about my day  here and I hope to have some similar opportunities sometime soon. In fact, I think another has popped up but the gig hasn’t been announced yet so got to keep it zipped.

Oxjam wasn’t my only gig hit in the past couple of weeks. I have been to two other gigs not to see the main act but to see the brilliant support. Free Galaxy are a band who I have wanted to see play for a while now because we went to school together. I have loved their three released singles but they were so much better in person. They sounded amazing. Right now, they are only small and play gigs mainly in the Coventry/Birmingham area but I hope that they expand and grow. They have a lot of talent and are great people.

A few days later I saw one of my favourite bands, Calva Louise. They have been supporting The Blinders on tour and I was thrilled to see that one of their stops was in Birmingham. I have seen them once before back in March (I wrote about it here) when they blew my mind and I thoroughly enjoyed seeing them a second time. They are due to release their debut album too which is really exciting! I cannot wait.

So, that’s my music fix. What else has gone on? Hm.

One of my best pals came to stay for the weekend! Which was awesome. I cooked without giving him food poisoning, I dragged him to watch Liverpool play Huddersfield Town at the pub on campus and bought him drinks. Basically, instead of food poisoning, I gave him alcohol poisoning. Joking! Obviously…

Seriously it was a very fun weekend and I miss him a lot already. 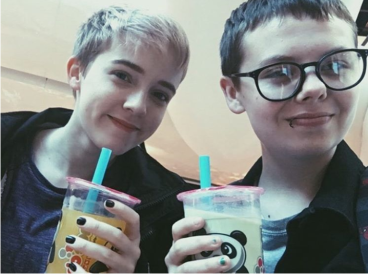 I did try something new this week! I know you’re shocked but I wanted to try something new. I am at university now so I am meant to have new experiences. So I went bouldering with my friend from uni which was scary, hard work but also a lot of fun. I was very surprised that I wasn’t completely useless like I thought I would be. I got to the top of some of the walls (which can be seen in the cover photo of this post) and didn’t fall and break my neck. Result!

Thinking about it, this post isn’t much of a double whammy but if I am honest the last two weeks have been very stressful. Not only have I had a lot of work but I also keep putting myself out of my comfort zone to try and improve myself as a person but at the same time it is making me feeling pretty bad. I guess I have got to try and find the right balance…

So, that’s about it! I am at home now with my dog and hoping to get a full night’s sleep without shouting waking me up in the night. Yes, I have noisy flatmates.

Make sure you check out Free Galaxy and Calva Louise!

Picks of the week:

Join 957 other followers
Follow Music, Drums and Me on WordPress.com