If not, then you might be confused so let me catch you up!

I decided that instead of the normal Blogmas which many bloggers have done over the festive period instead I would do something that would benefit smaller artists. Everyday I posted a Spotify link to a track by a small artist for you guys to listen to and I think it was a success. I have received positive feedback from both people who listened to the tracks and some of the artists involved. Result!

You can listen to the completed playlist here and read about each of the artists below.

After seeing The Wholls in their home town of Bedford in August 2017 I was blown away by their talent and stage presence. Ever since I have been listening to their music with a few songs in particular on repeat. One of these tracks is “The Only One”, an indie-inspired rock anthem with a real energy. They are a four-piece who I definitely aim to see again at some point in 2019.

I saw The Cosmics support (now ex) band Spring King back in September and they were the perfect act to warm up the crowd at the O2 Institute in Digbeth. Their latest single, “Trust Is Blind” is simply next level. It is a song which captures the feeling of being in love snatched away by awful betrayal. They are a band which show that three people is enough as they rise in popularity. I have to see them again. You should all too.

This is another band I have the pleasure of seeing not too long ago. In fact you can read my review of their show here if you would like. This track is another bouncy one from the indie duo with strong vocals and catchy bass which is what I love about this band. There is a positive energy about them which I cannot quite explain. “You’re No Fun” is their latest single and was also the name of their recent headline tour.

It is great when you accidentally stumble across a great band; this band is no exception. The five-piece from the Midlands have a brilliant Britpop feel which sounds like it has come straight out of the 90s. I would describe their sound as melancholic helped by the heavy use of different guitar pedals. The track I picked, “Feel” I think is my favourite by the band.

This debut track from the Coventry indie band had me hooked on the first listen. I’m not sure how to describe their sound other than real. It is very real. As if what you hear recorded will be the same you hear live because there is no electronic overlay or tinkering. The vocals are very unique on “Where Did We Go Wrong” I would say and not at all over powered by the guitar. Brilliant.

If you a regular reader of this blog then you will know about how much I love this London based grungy indie trio. They were I think my favourite find of last year and are a wonderful bunch of people. “Tug Of War” is their latest single but there is much more material that you can listen to. Their debut album “Rhinoceros” is available from February 1st and they go on tour soon after. Check them out.

This alternative rock band from Kenilworth really put their stamp on 2018 and I am sure this year they are going to ramp things up even more. I loved seeing them live and this track, “Treadmill” was actually my fifth most listened to track on Spotify last year. They have a fantastic energy on stage and brilliant sound with not one, but two vocalists which I always like in a band.

The ex-Kaiser Chiefs drummer and songwriter kicked off 2018 for me with the release of his debut solo album, “Tell Your Friends”. This track, “I Love The Way Your Mind Works” is possibly my favourite track off the album. I love the 70s pyschedelia vibes mixed with the harmonising vocals and synths…plus there is cowbell is this song. You can never go wrong with cowbell! 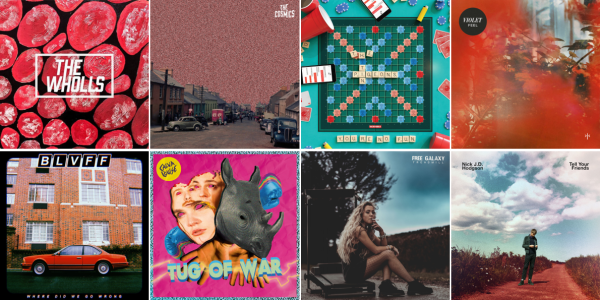 This is a band to watch. The band from Wolverhampton’s indie sound is appealing with melodic guitar and distinctive vocals similar to Catfish and the Bottlemen. This track, “Nightlight” is the band’s latest release and is quite different to their previous two singles. Much lighter with a chorus I would describe as beautifully simple. A lovely sound.

Now then, this artist captured my heart when I first saw him in February last year in London. His voice is….inexplicable – but in a good way! He pours his soul out during every performance and it is like you can feel what he is feeling. I chose “Way Back Home” because it is a track I relate to and I think so many others will too. I cannot wait to see what 2019 brings him.

This band is the epitome of Rock n’ Roll and this track, “Much Too Much” is my favourite of theirs. With strong male vocals giving it everything and the harmonising edgy female backing vocals works so well. I love the guitar in the bridge and I can just imagine jumping about in a venue to this song. I will have to do that and soon! This sort of energy is what we need on a stage.

I would describe this band as incredibly authentic. They are not scared about thinking outside the box with their sound and image. Trying to describe the sound is in fact quite difficult but I will give it a go; alt-rock (good start) DIY with undertones of psychedelia. Anyway I think it is brilliant. This track, “New Boy” is a demo but there is much promise for some good things popping up in 2019.

This is another quite individual act taking inspiration from many different eras which is evident in their music. On Spotify they are described having “60’s swagger with an 80’s groove and a 90’s attack” and I don’t think there is any better way of putting it. “Where Are You Now?” is a softer track from the four-piece compared to their other singles with a backing of stunning strings.

Day 14 – “Wasted Potential Me” by The Ellipsis

I finally saw this band back in November last year after hearing so much hype about them for ages! I was not disappointed. From the night this track, “Wasted Potential Me” is the song that stuck with me the most with a quick tempo and heavy drums. Maybe that’s just the drummer in me loving this track. Fast paced and filled to the brim with energy – a band who I must see again.

This is the first single by the Lancashire band and it’s a great way to kick things off. They are an indie rock band who have not backed away from the classic guitar sound. I love their image, their varied vocals and the drums. Pretty much everything then! “Resistance” is a dark track I would say simply by the tone of it but I dig it. I can hear their inspiration of the Arctic Monkeys seeping in there also.

This is the most popular track and debut single by the Coventry based band. It’s punchy. In your face. With an awesome beat and catchy guitar; I can just imagine what their shows would be like. Another band for the “bands-to-see” bucket list. I’m loving the electronic undertones on “Getaway” and I would say they share a likeness to music giants Depeche Mode.

Indie with a little bit of 80s pop dripped in. Brilliant. The Birmingham based band have four singles in their catalog of tracks right now but “Perfume” is their latest. You feel like you are going on a journey when listening to their material and it is easy to get hooked by the wonderful vocals. Some would call it experimental but I say be experimental because this works.

It was a friend of mine who introduced me to this band not too long ago and I was immediately drawn in by the bass guitar in this track “We’ll Be Dancing”. It certainly makes me want to dance. Their sound is Rock ‘n’ Roll but perhaps from a different era. Makes me wish I was teenager during the 90s Britpop era that’s for sure. New wave. If you want a label there it is.

This is one of my favourite tracks by the four-piece electro pop/folk band from Worcestershire. I have seen them live a couple of times and I always thing the same thing…why aren’t these guys bigger?! The lyrics are incredibly meaningful and sung brilliant in harmony – “Be Honest In Love” is no different. I wouldn’t have to think twice about seeing these guys again.

With over twenty-two thousand streams on Spotify I couldn’t run this campaign without adding “Time Will Tell” by this up and coming band. Fantastic on stage and off this four-piece have aspirations which has been evident by the flurry of shows at the end of last year. The lead has a brilliant voice backed up by well written guitar melodies and lots of rhythm. Check them out.

The debut single by the Yorkshire band has gone down like a storm with over twenty thousand streams at the time of writing and already having thirteen thousand monthly listeners. “joyrider” is the 90s grunge that has been missed in today’s music scene. I think it is fair to say – with the success these lads have had so far – that they could be a sensation. Something I can’t wait to witness.

I’ve ended up seeing this new band a couple of times now and I like their style. I love the use of guitar effect pedals in “Red Leather Boots” and the deep drawl from the lead vocalist. The crispness of the snare and hi-hat cuts through the fuzziness of the rest of the accompaniment making it all in all a very interesting sound. I wonder where they will go with it.

This track is the latest single by the Coventry band and I know they are good purely by the fact their five minute track flashes by and doesn’t for one second feel the slightest bit boring. I would definitely describe them as dark. “Evil Eyes” is filled to the brim of soul-stirring yet melodic vocals which invade your ears mixed with the expressive, frightening guitar. It’s simply amazing.

I wasn’t sure how I was going to end this twenty-four day campaign so ended it on a slightly more humorous note. The YouTuber created a version of Starship‘s “We Built This City” with the added twist of making it about sausage rolls. Somehow, this parody ended up being Number 1 at Christmas beating Ariana Grande and it was all for a good cause with profits going to The Trussell Trust.

I hope people enjoyed this campaign just as much as I did! Make sure you check out all the artists above using the Spotify playlist to find their music or check out my social media accounts where I have tagged the artists.

One thought on “My Blogmas: #24DaysOfMusicmas”