Live At Leeds. The award winning festival like no other showcasing the best of emerging talent from not just the UK but also overseas. With 200+ acts across twenty-one different venues for a bargain price you really cannot go wrong with this festival. All you have to be is a music lover.

Like last year, I didn’t at all stick to my planned schedule and found myself picking random acts at different venues. I think it paid off as I discovered so many different artists all of which I have been listening to on repeat since.

I kicked things off at Leeds Beckett SU where local band Curb were opening proceedings on the GigWise Stage. This four-piece played grungy tracks with a dash of psychedelia – they sounded ace. They had catchy drum grooves with awesome harmonising vocals which can be heard in their single “Great Kaleidoscope”. They definitely share vibes with giants Tame Impala and did a brilliant job considering it is always difficult playing so early in the day. The crowd who were there definitely enjoyed themselves as did I.

The only act I saw that I have seen previously is indie-pop outfit Brand New Friend. They brought their tunes and humour to The Key Club which was packed out to the brim. Since I last saw them, four members have become five as they welcome a bass player to the stage which definitely completes them as a line-up. They have an energy which I am sure other acts are envious of but also talent. They have some good tunes with indie hooks that are multi-layered with vocals from both a male and female vocalist giving them an edge. I’m glad I saw them again.

After a bite to eat and a swift accommodation change I found Skinny Living at Leeds University Union. It was a slightly late start due to a venue change after a water pipe had burst in the original venue but it seems their following found them okay as soon as doors opened, the venue started to fill up.

I was blown away by the indie-folk band. Their soul and wisdom are far advanced to what you expect of a band at this stage. I was hooked on the stunning vocals from lead singer Ryan Johnston whose lyrics are beautifully deep. Their most popular track “Why” is a brave depiction of depression and feels incredibly honest. The majority of their set followed a slow, emotional theme but there were bursts of slightly more upbeat tracks/bars. They are ones to watch for sure.

Local gems Marsicans took over the O2 Academy and got the place absolutely rocking. What I personally love about this band is the amount of vocalists they have. It really gives them not only an edge but accentuates them as a rising force in this competitive industry. The indie quartet have a plethora of absolute tunes from popular track “Too Good” to latest single “Your Eyes”, all of which have such energy and think share similarities to some of Blossoms‘ material. A group were moshing in the crowd to each and every track which was fantastic to watch from the balcony – it was all over too soon. I understand why they have such a huge reputation; especially in the Leeds area. 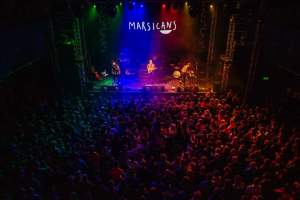 Rushing straight from the huge Academy it was a nice contrast heading into the familiarity of a smaller, underground venue. The Yorkshire Forum Stage at the Hifi was the home of a bunch of locals acts throughout the day but I was there to catch Ørmstons. This four-piece indie act put on a high energy performance with catchy, uptempo songs getting the crowd to dance. And their definitely was crowd!

Singer, Jess Huxham, expressed how they weren’t expecting so many people and how they were blown away. Well so was I! Not only did they have character and brilliant tracks but also they made it look effortless. I enjoyed song “Mexico City” which has an incredibly catchy riff and memorable chorus. That along with their cover of “Mamma Mia” were my highlights.

After such a strong act I wanted to dance some more so I headed to the Dance to the Radio Stage at Church where Cassia were performing. There was such a bubbly atmosphere and it was evident that they had quite the fan following. People were shouting out song requests and knew the words to their music – it was simply delightful. I loved their use of African style rhythms and beats with their interesting drum set-up. This can be heard in track “Small Spaces” which is the opening track of their new album, “Replica”. I definitely recommend you have a listen. 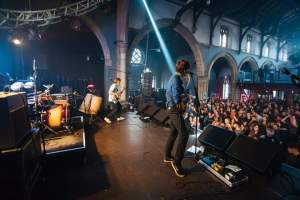 After another bite to eat I headed to what is probably the most famous music venue in the whole of Leeds; The Brudenell Social Club. Here there were two stages and a lot of people all obviously enjoying their Saturday evening. The stage that had me interested was the Dr Martens Second Stage in the Community Room for both KAWALA and Mini Mansions.

This turned out to be where the party was happening. The best atmosphere and crowd participation had to be for alt-folk band KAWALA. I had no pre-knowledge of this quintet and was simply astounded by the brilliant vocals from lead singer Jim Higson but also the electric hooks. They have a strong rhythm with afrobeat drums and edgy bass lines making feet tap and hips sway. They were definitely the band which surprised me the most throughout the day. Check. Them. Out.

The best way to finish the day for me was LA trio Mini Mansions who took to the stage for the Leeds leg of their UK tour. They are a concoction of talented musicians with Queens of the Stone Age‘s bassist Michael Shuman, Arctic Monkeys‘ touring member Tyler Parkford and The Last Shadow Puppets’ Zach Dawes. That alone is impressive but hearing them perform their dark alt-pop tracks with psych undertones had me entranced. They not only had awesome stage presence but the brilliant tunes to back them up such as in “Works Every Time” and “Vertigo” (which recorded features Alex Turner). It was worth the late start.

All-in-all it was a very successful and enjoyable day. Thank you so much to Sonic PR and Futuresound for having me. It is very difficult to pick a favourite act of the day amongst so many strong options but I am excited that I will get to see both Skinny Living and Marsicans again next month at Elland Road for another event ran by Futuresound.

You can get tickets for that here and for Live At Leeds 2020 here.

Join 957 other followers
Follow Music, Drums and Me on WordPress.com