So Glastonbury 2017 is well and truly done and dusted but it has been mega. I’ve watched more than I thought I would and have enjoyed many great acts – some who I’ve never seen before – over the weekend. Here is a list of my top five greatest moments of the festival. Enjoy 🙂

Getting a Number 1 is very special for anyone, especially if it is unexpected but I think Royal Blood’s latest album How Did We Get So Dark? going to number one was no surprise. During their set on Friday evening the Blood brothers toasted the success of their second album with two bottles of champagne. One each.

I felt very pleased for them and there definitely was a sense of warmth by the crowd watching their incredible set. 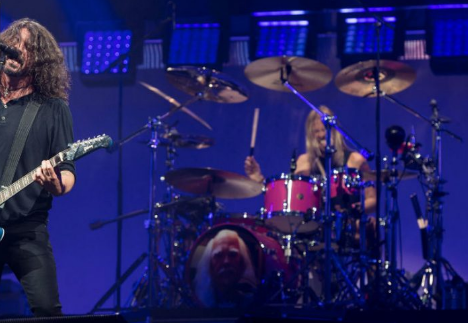 By far the best headliner of the weekend was the Foo Fighters. They started by apologising for not making the festival in 2015 when Dave Grohl broke his leg by saying “traffic was a bitch”.

They played for hours and got everyone rocking not just in Somerset but also the people watching it on their sofas at home. They just kept going and going. It explains the amount of energy drinks on their rider.

Drummer Taylor Hawkins swapped with Dave Grohl who drummed for Nirvana so he could take centre stage and give a rendition of Queen’s (and David Bowie’s) Under Pressure. Not many people can pull off a Queen song without uproar from fans, I mean look at Panic at the Disco who got slammed for covering Bohemian Rhapsody for the DC film Suicide Squad.

Flawless performance. Their headline slot will go down as one of the best in history.

On the Saturday, labour leader Jeremy Corbyn joined the party that is Glastonbury. He mingled with the crowds, pulled pints and gave a speech on The Pyramid Stage before introducing Run The Jewels. This speech was also shown on The Other Stage before the Kaiser Chiefs‘ set. I don’t think there are many political leaders in history who could create that sort of reaction from a bunch of festival goers. Kudos to him.

The Kaiser Chiefs rocked The Other Stage on Saturday and got the crowd jumping. The stage attracted one of its biggest crowds ever as the band played their long list of hits.

During The Angry Mob, drummer Vijay Mistry actually managed to drum off his own glasses but was composed enough to put them back on without making a fuss. It barely phased him. If I was in his shoes then the beat I was drumming would be in ruins but no, disaster avoided and he could still see which is a bonus.

After the Kaiser Chiefs had riled up the crowd during their Oh My God finale by getting them to chant “Liam” and sing the opening verse of Live Forever, the one and only Liam Gallagher begun his set causing quite a stir. Stage left he had David Beckham and son Brooklyn singing and stage right he had Dave Grohl. It was quite a coo that he had a set at Glastonbury.

He sang a lot of new material from his upcoming album As You Were as well as plenty of Oasis. This included the legendary song Don’t Look Back In Anger originally sang by brother Noel.

He finished his set by dedicating it to the the victims of the Manchester and London terror attacks as well as the victims of the Grenfell Tower blaze. It was all done acapella with him singing the verse whilst his drummer shook rhythmically a shaker in the background. The crowd sang loud and proud every single lyric but Liam left them completely with the chorus.

It was a magical moment and a fitting tribute to those who are injured and who have lost their lives in these tragedies. Well done Liam.