Being a drummer does take its toll…especially on me apparently. I have a feeling that this blog post is going to make me seem the most amateurish, uncoordinated drummer on the planet but here we go. Why not? Whether it is the silly knocks or buggering up my back there are a range of “injuries” that I have sustained in the past four or so years.

Sometimes I wonder whether I picked the wrong instrument; there’s the noise complaints, the size of a kit and also a bunch of injuries that come with it. But no, couldn’t live without my drums.

This blog post highlights them and some of the things I have done – sometimes with the help of others – to rectify the problems.

Starting small I have to highlight the little knocks I have gotten in the most bizarre places and in fact looking back I am not quite sure how any of them happened. When you are in the moment not much phases you. Maybe apart from the tip of your drumstick catching your columella on your nose. I know…stupid right?

I think I have it caught on camera actually because I sometimes film my drum sessions just so I can check up on my posture because my back has been such a problem, especially this year. More on that later. 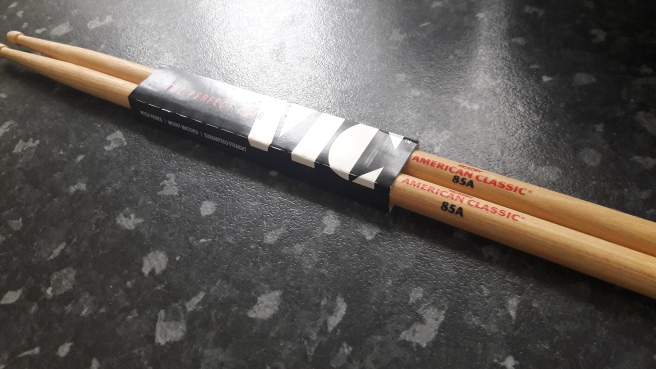 If my memory serves me right this particular incident was during a rendition of Sleep by My Chemical Romance but I could be wrong. It rings a bell though! I might have to look for that footage…

I have had a slightly “iffy” right ankle since I was eleven years old after tumbling down some concrete steps. I covered quite some distance during the fall but fortunately a slightly skewed ankle is what I escaped with; it could have been nasty.

Occasionally it does cause me problems with my dance and if I go on long walks which is a rare occurrence but it can be an issue whilst drumming. Sometimes, during a long drum session, it may start to ache. If this happens then I just stop and rest it knowing that in the long term it will be fine.

This is also pretty rare for me but sometimes I do get sores on my digits; usually on my thumbs and little fingers. I am not sure why it happens because it isn’t always after a particularly long session. I wonder whether it is the change in temperatures which causes it…

My kit is the garage which has been converted into the office so although it is quite homely and there are radiators it does get a bit nippy. The heat source is unreliable and there are lots of draft points. I tend to initially wrap up when I go to drum in a hoodie, slipper boots (my chosen drumming footwear) and sometimes a hat but then I overheat so end up shedding the extra clothing. I can then get cold again and the circuit continues. Maybe the temperature uncertainty is causing these sores and blisters? No idea…

Like Nick Hodgson (ex-Kaiser Chiefs’ drummer and songwriter) is sporting in the featured image of this blog post, I have started to tape up any sores just whilst I drum. It is unnecessary to do this for everyday tasks because although we use our hands for a lot of tasks we don’t usually for the same amount time or energy. I normally use black tape (which I cut to size) because it is usually available to me but otherwise I use medical tape. It is probably better for my skin too.

This is the biggie. A big problem with drumming for me personally is back pain which may be caused by the set up or my posture but either way it causes me quite a lot of discomfort.

A few years back, I asked during a live stream Joel Berghult (a.k.a. RoomieOfficial, YouTube Musician) why he didn’t drum anymore because at that time he didn’t but more recently he has started to dabble here and there. His response was because he got back ache and at the time I was wondering what he was on about but soon I then begun to experience what he was talking about. It is a bugger for anyone but if you have a bad back then drumming is out of the question.

I injured my back properly during dance back in January but I was stupid enough not to let it heal properly. I went to a gig and the excitement made it worse, it then got a bit better but then I went to another gig so it worsened once again and so on until March when I decided that enough is enough. I rested it properly, took some time off dance and drumming, when I did dance I made sure not to exert myself too much and aided my recovery with sports ice packs and painkillers.

I then felt completely mended in the grand scheme of things but still back pain when drumming was becoming more and more frequent making me frustrated.

At the end of May I got very pissed off at it all. I had a great day whacking out some new beats but the next morning woke up in a lot of pain. What happens when I get annoyed? I take to Twitter and that is what I did:

How does @vjthedrummer not have a bad back all the time? Maybe he does…I’m not cut out for this drumming thing

I tweeted this followed by a range of emojis which I can describe as the laughing/crying face, the “ok” hand gesture and a disgruntled looking yellow dude. I was seriously thinking that maybe enough is enough and that I should focus on something else even though drumming is something I love with all of my heart even if I am not the best.

Thankfully, Vijay came to my rescue by replying “Yes you are. A cool drummer x” as well as some helpful suggestions on how I can improve it involving altering my set up. This can be seen below.

This was very helpful and I spent over an hour sorting everything out and it definitely has improved the situation. I don’t know for sure about my back situation now because I have been so bogged down with exams and personal issues that drumming has been at the back of my mind.

However, now that is all done and dusted I can focus on what I love and just hope that I don’t do myself some real damage in the future.

I have a very long summer, I plan to spend a lot of it with my drums but also doing some song writing with my okay keyboard skills and basic guitar knowledge. It will probably be terrible but who knows? It could actually be pretty awesome and I am looking forward to it.